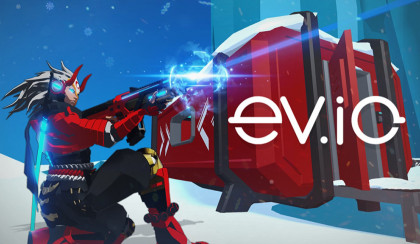 Ev.io is a Quake-related game. Where you fight in the arena with standard weapons, which you can choose in abilities among which (Hand Cannon and three Rifles) and Katana.

The arena model is very reminiscent of the good old Quake, but its style and interior may remind you of Cyberpunk with its neons and vibe.

This game will not make you bored, because it has quite a variety of modes to play, both for the solo player and for playing with friends or team. At the time of writing this review, it has 3 standard modes:

Also, with the update, Ev.io has integrated the NFT model into the game, which is built on Solana, from now on, every player can buy NFT for themselves on the marketplace from the game's collection, and use it as a unique skin in the game.

And every player who wants to earn. Can earn money on NFT by playing 2 additional modes:

How to play in Ev.io

Unlike Krunker, where you choose the role of your character and accordingly its weapons, in ev.io you need to look for weapons scattered around the arena in special areas.

In this game, the weapons are quite diverse. From pistols or shotguns to heavy weapons like grenade launchers and rocket launchers or sniper rifles.

The only downside is that all the selected weapons have limited ammunition and in order to replenish it, you need to look for the same weapon in the arena again.

Regardless of which mode you play in, the player/team with the most kills per battle wins.

In order to improve your effectiveness in battle, the game provides a wide range of abilities. Which basically allows you to drink your movement speed, boosts, and auxiliary ammunition like grenades, mines, and teleport.

Space + E (under yourself) to fly up

F - Flash grenade (should be unlocked in abilities)

Y - Mine (should be unlocked in abilities)

B - Trip Mine (should be unlocked in abilities)


As Grizix we offer Ev.io unblocked servers on our page. You can download the Ev.io mods to upgrade the game of your taste and start playing Ev.io.