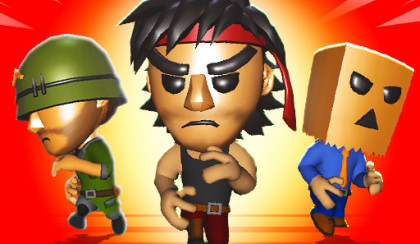 Nightmare Runners io is a running competition between thirty online players. You are given the opportunity to choose your runner, which you will manage on the track, wait until the competitors come up and start. The task - to get to the front of the finish line and not get under the next heavy object. Which will be enough on the track. There is also a mode for two, where you will have only one rival and quite real, sitting next to him, but controlling his character. For every win you get reward for which you can buy a new skin in Nightmare Runners.

How to play in Nightmare Runners io

Reach the finish line before the other players to qualify for the next round. 3 Rounds in total per session.
Avoid obstacles, escape traps, don't fall into the void.

WASD - to controll your charapter
Space - to jump