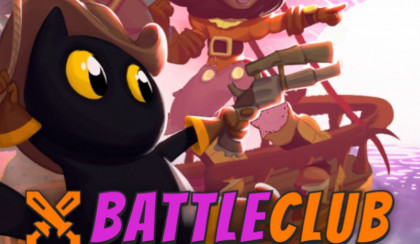 BattleClub - It is a bright multiplayer 3D shooter with RPG elements.

This game includes several types of activities such as: Domination, Team Deathmatch, Race, and PvP.

And well detailed and well thought out maps, so you are free to choose different tactics to win and enjoy the gameplay.

There are 10 different characters in the game that you need to unlock by getting their shards, after you collect the required number of parts of the character, you can unlock it and play as it.

They all have their own characteristics, and skills and are divided into two types: tank and support.

The main game currency is gold, it is necessary for pumping characters, buying boxes in the store, etc.

Also available is the pumping of levels of your game account and intermediate stages of this level, for the opening of which you will receive various bonuses such as (chests, shards of the original characters, gold, etc.)

Daily missions - every day you will have missions to perform both combat and various activities. They are worth your attention because the rewards for their implementation are significant and will help speed up the pumping of your favorite character.

In general, the game is very addictive with its gameplay, which is not monotonous and has various activities.

How to play in BattleClub.io

In the beginning, you will have only one type of competition and one character, but you will quickly discover other activities and characters. To unlock new types of activities, the player needs to earn reputation points by playing others. But if the player or his team loses, he loses a certain amount of reputation.

To open new characters for the game, you need to pass activities and complete tasks and do not forget to pick up the daily chest. It is from the chests that you can get parts of new and already received characters for their pumping.

The game has the ability to pump your character, improving his skills and discovering new ones.

I recommend, for the newly opened character to pump the first skill, because it will work on RMB click and play will be easier.

- Domination - in this activity, you need to capture and hold 2-3 points. The team that will be the first to score 100 points wins. The more captured points, the faster you get points. Many players do not pay attention to the points and continue to fight with other players, and as a consequence - a lost battle and a lost reputation.

- Race - this mode is very similar to the game LolBeans, where you need to get to the finish line first on the way with obstacles. The first 3 places are winning, there are 8 places in total. If you came last, you lose your reputation.

- Team Deathmatch - the main task is to destroy enemies. The team that first destroys 15 enemies wins.

- PvP - if another player is with you in the same lobby, you can challenge him to PvP, it will spend your energy points, 1 point is replenished once an hour. You can also invite him to a party or add him to your friends.

RMB to use Special Skill (Hold to Aim)