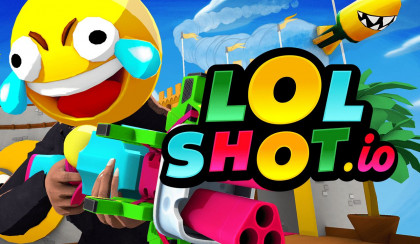 LOLShot.io is a free multiplayer .io FPS game online - no download needed. Share an invite link to play with friends in this competitive skill-based first person shooter packed with aerial action. Score points for spectacular combos: yeet other players out of the arena, perform mid-air kills and teleport through portals to ambush opponents.

How to play in LOLShot.io

With an arsenal of 8 crazy weapons to master, dash and fly around fun and colorful arenas hunting down opponents in deathmatch mode against up to 16 players. Simple kills are not enough to win, perform the most spectacular and creative ones to get bonus points and reach the highest score by the end of the match. An hectic gameplay is augmented by your ability to rocket-jump freely, use teleportation, jetpack yourself high in the air with a flamethrower, rain destruction from above and perform impossible leaps using powerful jump pads. Learn the maps and where to pick up weapons and bonuses, many have special functions: the Lifegun ray vampirizes your opponent and is the only way to regain health, the flamethrower is also a portable thruster and the Magic Milk gives you a x3 damage bonus for a brief time.

- Reload by picking up weapons


As Grizix we offer LOLShot.io unblocked servers on our page. You can download the LOLShot.io mods to upgrade the game of your taste and start playing LOLShot.io.