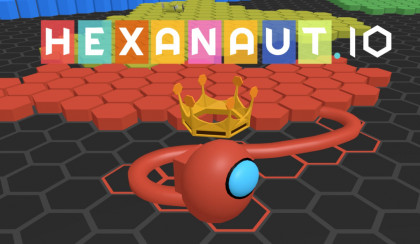 Hexanaut.io is a real-time multiplayer io game. In which you need to capture territories and hang enemies on your way. The main goal is to become the king and hold out to win the battle. But beware, enemies will try their best to stop you. In this game, you will not have time to be bored, because in the arena you need to constantly watch out for enemies.

How to play in Hexanaut.io

After joining the game, you need to capture free and hostile territories. To do this, pose the character, a tail of your own color is formed after you go beyond your territory. It indicates how many hexagons in the middle of it will be captured. To attach the captured, you need to return to your territory.

It is important not to touch your tail with your character, otherwise, you will self-destruct.

Captures pump up the progress bar and raise your level. Each raised level speeds up your character by +10%.

As a recommendation, don't move too far from your territory to make it harder for your enemies to destroy you.

In order to get certain bonuses, totems are placed in the arena. Capture one and you will get its bonus.

- Frost cloud generator, creates a zone in which all enemies slow down. A very interesting totem, because at the initial stage, it is very easy to catch enemies and destroy them on your territory

- Teleport gate, teleports you around your territory

- Tesla Tower Totem, this totem shoots random hexes on the border in front of your territory and attaches

Destruction to the enemy

To destroy an enemy, you need to cut off its tail before it bursts into flames to attach territory. But be careful, because it can destroy you too.

Also avoid collisions with the enemy foreheads, because in this case you will both be destroyed.

What you need to win

Your goal is to be the first to capture 20% of the hexagons, get the status of "King" and stay the leader for 3 minutes. Or if another player did it first, then you have 2 options: 1) You can try to catch him and destroy him; 2) You can overtake him by the number of captured territories if the difference between you is insignificant.

After receiving the status of "King" and the countdown starts, you will be shown all the positions of other players on the mini-map, get a speed bonus, and new players will stop appearing on the map. So you can safely start eliminating your opponents.

But be careful with the status of "King" - your movements around the arena will be shown on the mini-map.

You will also move up in rank. The speed depends on how effectively you played the battle.

Depending on the effectiveness of the battle, you can be awarded coins and given chests, from which you can get random items. For coins, you can buy desired skins and badges when you are in the lobby.


As Grizix we offer Hexanaut.io unblocked servers on our page. You can download the Hexanaut.io mods to upgrade the game of your taste and start playing Hexanaut.io.